It has been while since Hobart has seen a good strong Aurora. Yesterday the numbers were looking good all day, see: ozcreations.biz, and sure enough come dark the green and red was clearly visible to the naked eye.

From about 8:30 to 11:30 I snapped a few shots, and a few panorama stitches. I will upload some more to flickr as well.

If you would like to know more about the Aurora Australis, why not join the Facebook Page?

:Update: I returned to this location the other night, and while the gum still stands it has lost the main branch shown in this shot. It’s a shame as I would have liked to shot this tree again with a stronger aurora. 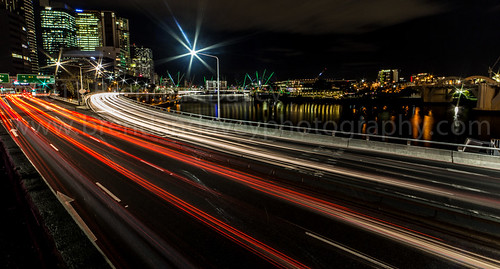 Brisbane CDB, a photo by Brendan Davey on Flickr.

I’ve been using the 14mm Samyang for a while now, and I must admit it’s a very good lens, very sharp. I’ve noticed on occasion that it is susceptible to lens flares, but nothing too bad considering it’s 14mm.

Using the Abode lens profile downloader I’ve managed to get a reasonable lens profile for use with Lightroom 4.4 and it’s fixed most of the vignetting and distortion.

It’s totally manual, which for landscape photography is perfect, since you normally spend the extra time to setup your shot and check focus using live view anyway.

If your considering buying one, then go for it, it’s well worth the money, or lack there off when compared to the brand equivalent. 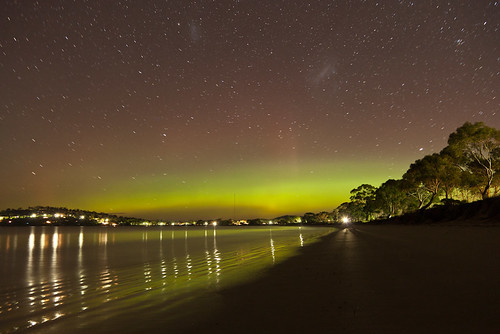 Aurora Australis, Lauderdale Beach, a photo by BrendanDavey on Flickr.

You can just make out the red “curtains” or ribbons above the green glow. It has been quite a while since I have seen one this good.

2012 is predicted to be a big year for sun spots. It will be interesting to see if there are any good Auroras next year. Recently while away for work I had the pleasure of visiting a few new country’s, and I’d just like to encourage any readers of this Blog to always take the time to incorporate some photography into their trip, not just the tourist shots, but taking time to return to a nice spot or setting aside some time to shoot a particular event or location in detail.

Schedules are always tight when traveling, but I have found some of the better shots I’ve taken while away, like most good shots are the planned ones. Shots where preparation and time has been taken with a clear goal in mind, not just a shot from a moving tour bus.

Take the time, even if your exhausted, looking back you won’t regret it. 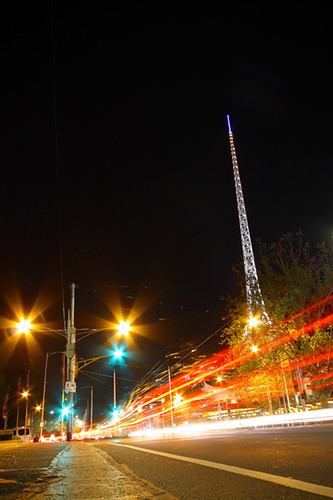 I think one of the important things that has worked for me in the past in capturing interesting pictures is the location and sometimes risk I’ve had to place my camera in to get them.

For example the above shot was taken while sitting my camera on the curb (in a bicycle Lane) alongside busy traffic in the middle of Melbourne. In the same outing I also lost a lens hood into the river while precariously balancing my Camera on the edge of a bridge to capture a Melbourne Night Scene.

It can probably be said that a good picture involves risk, something new, something different. So why not use the same philosophy when capturing the picture.

Stick your tripod in the water, use the fact that your camera has weatherproof seals. See your camera as a tool, built to do a job. Your camera is most likely depreciating at a huge rate, so you mite as well get some good use out of it.

Sure don’t take unnecessary risks, but don’t be scared to get a scratch on your camera, after all why do you have your camera?