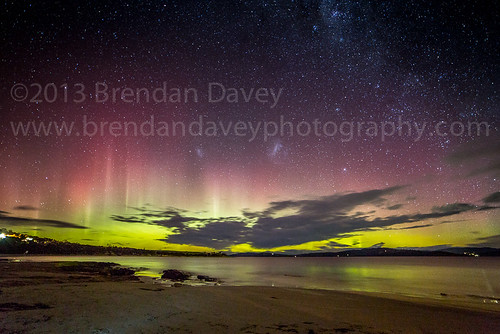 South Arm Beach, a photo by Brendan Davey on Flickr.

Tasmania, and Southern Victoria witnessed a fantastic Aurora last night and I managed to shot quite a number of great shots.

The Aurora was quite visible with the naked eye, and it was very easy to see the ribbons, and at one stage they were so bright they were showing clearly in live view on my camera. WOW.

Hopefully we will continue to see more over the coming months. 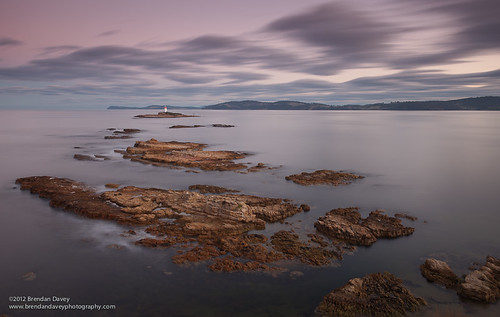 Iron Pot #4, a photo by Brendan Davey on Flickr.

Waiting for the Aurora over the Iron Pot at the mouth of the Derwent River. Just reflected light in the clouds as the night progressed. Maybe tomorrow. Hopefully it will be colder and less cloudy. 🙂 After living in Tasmania for all my life I shouldn’t be surprised when I stumble onto “new” fantastic locations.

I’d been viewing lighthouses recently on flickr and decided to try shooting the Iron Pot lighthouse, after a quick visit to google maps it appeared the only suitable location from shore to shoot was Fort Direction near South Arm.

During the Second World War Fort Direction was used to monitor the mouth of the Derwent river and protect Hobart. Because there is still a military base located there, the only way to the southern most tip for shooting the Iron Pot is via walking the coast line, about a 30 min walk.

Some of the rocks and foreshore are the most interesting I have seen, with patterns that seem almost impossible to form.

Due to poor weather I don’t think I took any fantastic shots, so I’m waiting for that “magic” weather pattern.