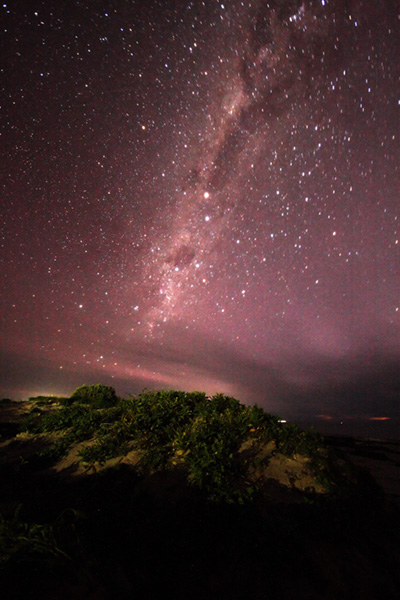 Long exposures are normally used to capture changing conditions or movement in a scene, such as  Star Trails, Moving water, Sunsets & Sunrises. This tutorial will primarily discuss long exposures beyond the automatic capabilities of most cameras, or 30 seconds plus.

During this tutorial I will only refer to “full” f-stops as it’s easier to begin with.

Before attempting a long exposure the first thing to understand is the relationship between ISO, Aperture and Shutter speeds.

ISO:
ISO in basic terms is the sensitivity of the sensor or film.

The Relationship:
The most important thing to remember is that all 3 are related and if you reduce one you must increase another, Some basic examples are:

Assuming the same ISO:
A 1/30sec exposure at f8 is the same as a 1/120sec at f4, by reducing the shutter speed twice (halving twice), I must increase the light by increasing the light twice (reducing f-stop), OR 1/4 the original time means 4 times the light allowed in for the same exposure.

More Complex:
A 1 second exposure at ISO200 / f8 is the same as a 1/2 second exposure at ISO100 / f4. This example is more complex as it involves changing all 3 settings. However working through it logically:
First we reduce the ISO to 100 giving us (2 seconds at ISO100/f8), we then change the f8 to f4 and decrease the exposure to 1/2sec because we are letting more light in, giving us the final figures.

It is really important to understand the concepts above and be very familiar with f-stops, ISO and shutter speeds. If you camera has Manual mode, then I recommend you use it and play around to understand the relationships more,

Because the exposures we are talking about are very long, waiting around for an hour to find your shot was incorrectly exposed will not make you happy. Remember the Rules: halve and double, and experiment, experiment & experiment.

Download the Exposure Computer, print and cutout the circles, then pin the smaller circle on top of the larger one through the middle, allowing it to rotate. This device allows you to look at equivalent pairs of f-stops and shutter speeds for the same exposure. example: After you have adjusted for new ISO in above example align 64seconds and f2.8. All the other values (pairs) will also work, f2 & 32 seconds, f4 @ 2m8sec etc, giving the same exposure.

You can also use it to recalculate the new values based on the higher ISO, example to reduce ISO3200 to ISO100 is 5 halvings, set the start f-stop and shutter speed pair, then rotate the top circle 5 steps CCW. you can now use any of the pairs for exposure at ISO 100.

Some things to consider:

Some examples of long exposures: