It’s taken me a while but last night the weather was favorable and I managed to finally get a reasonable Aurora over the ‘Pans’ at Eaglehawk neck. As an added bonus I also scored a little airglow as well, seen here as the green glow to the left of the picture 🙂

For these shots I used an ND Grad filter to darken the sky allowing more exposure in the foreground without overexposing the glow of the Aurora. The pan formation is a series of concave depressions in the rock that typically forms beyond the edge of the seashore. This part of the pavement dries out more at low tide than the portion abutting the seashore, allowing salt crystals to develop further; the surface of the “pans” therefore erodes more quickly than the joints, resulting in increasing concavity.

The loaf formations occur on the parts of the pavement closer to the seashore, which are immersed in water for longer periods of time. These parts of the pavement do not dry out so much, reducing the level of salt crystallization. Water, carrying abrasive sand, is typically channeled through the joints, causing them to erode faster than the rest of the pavement, leaving loaf-like structures protruding.” I have lived in Tasmania all of my life, and surprisingly this is the first time I have visited Fossil Cove. I think it’s one of those places that photographers know about, but keep it a secret. So, it was not me who told you about it….

For this location you really have to check the tides as well as the weather to ensure your going to be able to walk under the arch to be able to shoot all those fantastic rock layers. Of course you can always get your feet wet, which I don’t mind.

Fossil Cove is not far from Hobart, and it’s a very nice location. I’m sure I will visit again soon, maybe take the family. 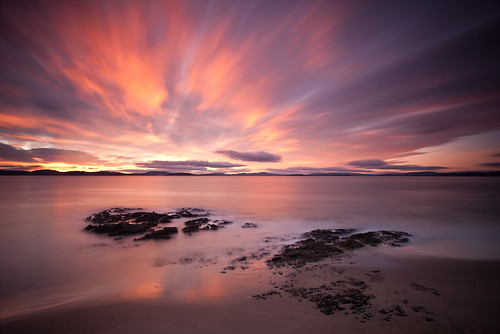 It’s been a long while since I’ve posed to my blog, and a lots been happening. I’m aiming to get more regular updates and articles up, in the mean time, here is a picture I took last week.

Long exposure with 10 stop, I got the timing just right to capture the clouds when they lit up, 2 mins either side and it would have been rather dull.

Just how good is the weather sealing on the Canon Cameras?

Well I’m not really sure, but I do know that when I took this shot it was pouring with rain. I had arrived early at Cemorne Beach to take some pictures and had setup my camera and started to take some long exposures. However it was becoming very apparent that it was very likely to rain with a rather black cloud slowing making its way accross the landscape behind me. Eventually the sky opened up and rain came pouring down. I had no umbrella and had to make the choice to either pack up or continue to shoot.

The Canon 5d mark 2 is water resistant right? So I decided to just go with it and stay. With no wind I was getting little or no rain on the lens and I managed to get some good shots. The camera got very wet but did not miss a beat, and it’s still going strong a month+ later (after I took it straight home to dry off).

I guess the bottom line is that a lot of people see their camera as a large investment, trying to look after it for resale value or somehow to prolong its life. When in reality it’s a tool. How many shots have been missed because they did not want to get their camera wet or dusty. If you camera is well manafactured with a metal body and weather sealing, take the risk, get the shot I say, or at least have equipment to mitigate the risk like an umbrella or rain cover 🙂 It’s that time of the year again for snow, Mt Wellington has had a few good dumps over the past few weeks, so I thought I’d head up and take a few shots at sunset. Some bettter light would have been better, but still ok.

Sometimes you look at a picture and you think, “It’s okay, but nothing special, I wouldn’t hang it on my wall”. Occasionally these shots can be converted to Black and White with fantastic results. This picture has a very rich blue sky and when converted to B&W it was possible to change the hue and saturation of the blue to make the sky really “pop”. The effect was created in Lightroom, and I suspect better results could be achieved with Nik Silver Efex Pro.

The Mayfield beach coastal reserve is a popular spot for campers on Tasmania’s east coast, run by parks and wildlife you can stay for only a gold coin donation, but be warned there’s no water and only a drop toilet. With an easterly view towards the Freycinet Peninsula the beach captures fantastic sunrises. I’m still deciding if I should add this shot to the shop for purchase or not.

Long gone are the planks that ran along this jetty. All that remains now are a few weathered pylons. The sunset really brought out the weathered pinks, coupled with the rust, I think they look great.

Taken about 20 Km’s down the coast from Swansea on the Tasmanian east coast. I love the aqua blues. The water in this bay is amazingly clear. Tasmania is very photogenic. The 5D mark 2 is working great and with no more “black dots” from the firmware upgrade there is no doubt this camera will give the D700 some good competition.

The only problem I’ve had so far is ungrading just about every bit of harddrive I have. New larger flash cards to support 21MP or 20-25Mb files for each photo, an 8Gb CF card only gets about 260 Shots. I’ve expanded my Storage bringing online another 500Gb of space, so that will probably last the summer 🙂

The shot above is a HDR taken at Taroona.